Many parents of teens feel that once their teens get a smartphone, the device quickly becomes almost a new part of their bodies. Some teens seem constantly glued to a screen, even when they should be sleeping, eating, or studying. And unless you’re constantly looking over their shoulders, it can be hard to know what exactly teens are doing on those screens. How do teens really use their phones, and what should you be doing about it?

You know your teen spends a lot of time on their phone, but how do you know what they’re really looking at?

Of course, one way to know what your teen is doing on their phone is to simply pick it up and look through it. You’re the parent, after all, and you probably pay the phone bill. Why not just look?

The problem is that teens can find ways to hide things that they don’t want you to see. Many teens use vault apps – apps that look like something innocuous, like a calculator or volume manager – in order to mask other things, like pictures or videos that they know you’d disapprove of. Some of these vault apps can even be used to hide other apps.

Between social media, anonymous messaging apps, and dating apps, there are a lot of different ways to meet people online, and teens know them all. And they aren’t always just meeting other from their own schools or neighborhoods.

Some of the apps that are popular with teens make it very easy for teens to meet strangers – including adults – that they wouldn’t meet any other way. Sometimes this is intentional – teens like to test boundaries, and it’s not entirely a new thing for teens to form worrying relationships with older people or people that their parents wouldn’t approve of. But sometimes it’s not intentional. On social media, anonymous messaging apps, and dating sites, it’s easy to pretend to be someone that you’re not, and teens often feel like they know someone after spending some time chatting with them online. This can lead them to feel safe meeting someone who is essentially a stranger, and who may be lying about their identity. For obvious reasons, this can result in teens winding up in dangerous situations. 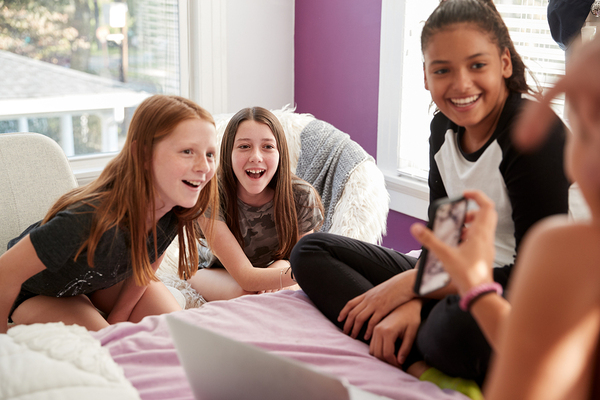 Smartphones can be dangerous, but they can also be fun and useful. It’s up to you to steer your teen in the right direction.

The news isn’t all bad. The convenience of having the entire internet at their fingertips allows teens to learn things that they might not learn anywhere else. This can range from learning how to use software that helps them create art or music to looking up answers to questions about sex education that they may not be comfortable asking their parents.

Teens also just use their phones for fun. They can listen to music, stream the latest episode of their favorite television show, and browse memes for a laugh when they’re feeling down. It’s important to remember that smartphones aren’t inherently a bad thing. A smartphone is a tool, and while it can be misused, it can also be used well.

Because of their stage of development and relative lack of life experience, it’s normal for teens to push boundaries and make mistakes. It’s on parents to be aware of the dangers their kids can encounter online and to set rules and enforce them by informing themselves and overseeing their teens’ smartphone activity. Parental monitoring software can help you understand what your teen is doing, who they’re talking to, and what they’re downloading. This can help you guide them in using their smartphones in ways that are safe and healthy. To find out more about parental monitoring software,  get our free trial.